It’s not fair to blame it on Pokémon, really. They weren’t the worst of it by far, though the limited edition Pikajew did echo the unfortunate spirit of the times. 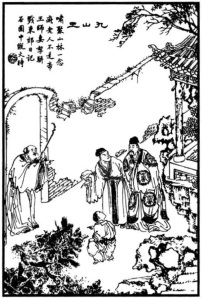 The Pure Tribe had their own apps, monsters and backends. Variations. Innovations. Memes and games catch on and evolve. The whole time they were annotating and mapping. Highlighting targets in bold colours: signs, shrines, grandmothers, foxes. Sharing high scores on the day. Trading in parts. People and drones had got in plenty of practice beforehand. “Gotta catch ‘em all!”

The mountain city of Mount Huan is acknowledged to be one of the wonders of my home district, even though many a year goes by when it is not seen at all. A few years ago, the lawyer Sun Yun’nian was drinking with some mates on his verandah when suddenly they noticed a lone apartment block on the mountain opposite, rising up far into the deep blue sky. They looked at each other in sheer disbelief, as they knew of no condominium in that vicinity and had not had a chance to buy off the plan. Then a vast number of skyscrapers with blobject glass curves, abstract sculptures, antennas, and wall-gardens came into view, an unsolicited message from city hall arrived reminding them to vape responsibly, and they realized it was the Mountain City of Mount Huan.
Presently the expressways and light rail of the outer city became visible, and within them they could distinguish countless storied buildings, temples and residences. Suddenly a great wind arose, dust blew in, and the city could scarcely be seen any longer. By and by the wind subsided, the air cleared, and the city had vanished, save for one tall tower. Each storey of this tower had been pierced by sixty shuttered windows, all of which had been thrown open and let through the light from the sky on the other side. One could count the storeys of the tower by the rows of dots. The higher they were, the smaller they became, until by the eightieth story they resembled tiny stars, and above that they became an indistinguishable blur of twinkling lights disappearing into the heavens. It was just possible to make out tiny figures on the tower, some hurrying about, others leaning, or standing.
A little while longer, and the tower began to decrease in size, until its roof could be seen. One by one, pieces the size of an apartment or a gondola would detach, descend at an orderly pace down the side of the building, and roll away, disappearing from view. The tower continued shrinking still further to the height of a stadium, and then a car, then a bean, until finally it could not be seen at all.
It’s said you can fly to Mount Huan, if you need to, and that maps work fine in the city centre, but are glitchy to the point of useless in the suburbs. You have to get a local app: I forget its name. A determined walker can take in the whole layout of the city – its markets, its users, its parks. It is in no respect different from a city in our world. The annual “Ghost City Marathon” has become popular in recent years, and is well regarded, though there are problems recording accurate times. 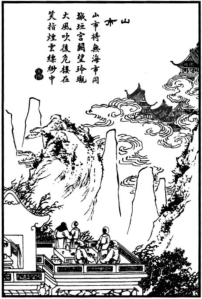